With 600PS from a 5.0 litre Supercharged V8 engine, Project 8 is the most powerful road legal Jaguar in history. Ben Selby writes...

The numbers really speak for themselves. All-wheel-drive, a 600hp 5.0-litre Supercharged V8, zero to 100km/h in 3.4 seconds, flat out at 320km/h, carbon brakes, and a lap time around the notorious Nurburgring of 7 min 21.23 seconds, the Jaguar XE SV Project 8 is a smorgasbord of get up and go, and at long last, was able to be viewed to Jaguar owners and fans in Canterbury.

As part of the national New Zealand tour, a single XE SV Project 8 was on hand at Archibalds Jaguar, allowing the Jaguar faithful a unique opportunity to get up close and personal with this rarest of four door cats.

With a starting price of $350,000, each of the 300 limited edition vehicles are hand-assembled and, have been described as the most powerful, agile and extreme performance Jaguar production car ever. Members of the Canterbury Jaguar club and the popular Avid Car Caffe were in attendance with their eyes on stalks for most of the evening.

Pictures of the Project 8 really don’t do it justice, the oodles of carbon fibre splitters, the air vents, and the SV detailing, along with that gargantuan rear carbon fibre spoiler, makes for a stunning looking piece of kit. “Around 75 per cent of Project 8’s panels are different from the standard XE saloon, so you know it is something totally unique,” says Archibald’s Jaguar and Land Rover Sales Manager Darren Griffith. 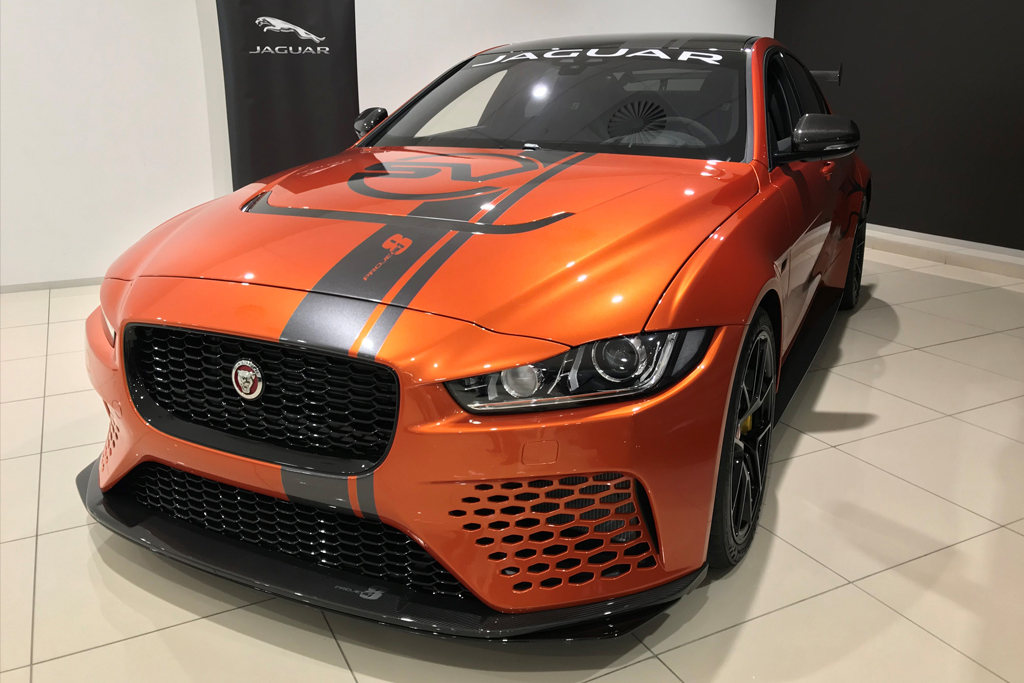 Hop inside and you are greeted with a stylish yet purposeful cabin. Buyers can spec their Project 8 to have the rear seats removed, which this one had, completed with roll cage. While we weren’t allowed to see the Project 8 in motion, Darren graciously climbed into the driver’s seat and engulfed the room with some glorious supercharged V8 bellow. Flicking up to sport mode, Project 8 crackled and boomed like distant thunder, it was only when Track mode was selected that all within 10 feet of Project 8 were deafened by that glorious torrent of eight-cylinder symphonic bliss. Honestly, four door saloons seldom sound as primeval as this.

According to Jaguar Land Rover NZ General Manager Steve Kenchington, the Project 8 is the ultimate in Jaguar’s saloon car design. “With a top speed of 320kmph, and a 5.0 litre supercharged V8 which can deliver maximum power of 600hp and torque of 700Nm, the Project 8 Supercar encapsulates Jaguar’s vision of the ultimate sports saloon,” says Steve.

This writer tried his luck at sneaking in a test drive, however it was not to be. The Project 8 was not allowed to be driven on the road. In fact, Darren was the only one allowed to drive it, from transporter truck into the showroom. Lucky so-and-so.